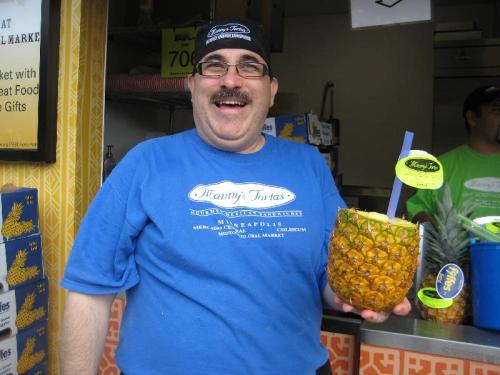 In case you need enticement to take in the Fair more than once, take the culinary route.  Though the diversity and abundance of ethnic delicacies are too much to survey – much less consume, here’s a taste sampler from the Midtown Global Market guaranteed to perk up the laziest taste bud.

In an interesting arrangement that allows all of the tenants to keep the home fires burning while they staff the Fair concessions, MGM restaurants will take turns at the International Bazaar

Three other Midtown Global Market businesses will be located in the International Bazaar throughout the twelve days of the Fair.

Outside the International Bazaar fairgoers won’t be at a loss for munchies.

Manny, who obviously just can’t get enough of the Great Minnesota Get Together, will be hawking his tortas in the Food Building throughout the Fair.

The Produce Exchange will feature their popular “Big As Yo’ Face” sweet and juicy peaches in the Agriculture Building, across from the entrance to the International Market.

Also in the Agriculture Building Salty Tart bakery will serve their award-winning macaroons.