We all know that each generation has its own test, the contemporaneous and current standard by which alone it can adequately judge of its own moral achievements, and that it may not legitimately use a previous and less vigorous test. The advanced test must indeed include that which has already been attained; but if it includes no more, we shall fail to go forward, thinking complacently that we have “arrived” when in reality we have not yet started ~Jane Addams

On July 19 and 20, 1848, some three hundred brave souls, supporters of a common cause, gathered in Seneca Falls, New York.  They shared a common cause, to affirm and eventually guarantee, the rights of women, including a woman’s right to vote.   The enormity of their challenge is matched only by the results of the progress they envisioned, sought, and ultimately achieved.

As we grapple with the challenges that face this democracy today we may lose hope, not to mention stamina.  Thinking about the Seneca Falls Convention may shed welcome light on these dark days.

To preserve and strengthen our democracy will demand nothing less than a movement of informed, committed American truth-seekers who care – and dare — to speak out, join forces and share energies towards a common purpose.

As always, we can draw strength and wisdom from those who have fought the good fight in the past.  A glimpse of the humble beginnings of the Nineteenth Amendment offers a sense of how a movement is born and how it grows with time and effort.  We may draw strength from a look back at the movement born at Seneca Falls some 170 years ago.

Previous posts related to ratification of the Nineteenth Amendment.

Rekindling the vision of the 19th Amendment: A centennial challenge

That’s it – that’s the full text of the 19th Amendment, words crafted with care by suffragettes Susan B. Anthony and Elizabeth Cady Stanton.  The proposed Amendment was first introduced in 1878, ultimately passed decades later.

Yesterday, Sunday June 4, 2017, marked the 98th anniversary of Congressional passage of the 19th Amendment.  The House of Representatives voted 304-90 and the Senate voted 56-25 in favor of the Amendment — which was then sent to the states for ratification.  Most times the reminder would have inspired a flicker of awareness; in light of the times, the occasion ignited a call to action!

The times demand that we embrace the centenary of this monumental moment in the nation’s history.  Women and their male supporters earned the right to vote in the face of bullying, misogyny, alternative facts (i.e. lies), money and mockery.  They resisted, collaborated, and kept a steady eye on the mission.  They understood that this democracy depends on the will of an informed electorate.  They spoke truth to power – and they succeeded.

On June 4, 2019 the nation will commemorate the centenary of Congressional passage of the joint resolution that led to passage of the Nineteenth Amendment, aka the Woman’s Suffrage Amendment, to the Constitution.   Recognition of the centenary of the 19th Amendment has the potential to expand our knowledge and appreciation of our roots and hone our collaborative strategies. If we seize the possibilities, awareness of the 19th Amendment can fuel a movement based on bipartisanship and acceptance of the fact that thoughtful policy has the power to trump pernicious prevarication and the over-rated glories of wealth.

June 4, 1919 was a pivotal step in the very long struggle.  A robust centennial campaign has the potential to magnify the import of the Amendment we take for granted a century later.  It seems to me that the best way to honor our forebears is to learn about their struggle, their strategies, their commitment to honor policy over politics.  It may seem early to celebrate – it’s certainly not too early to plan.

Though most long-range planning projects focus on a budget, the coin of the realm in this instance is the truth of history.  The work begins with serious research, the raw material of which is already on library shelves or in the digital stratosphere.  Recognition of the day is a moment in time; the real story lies in digging into the true facts and forces that shapedthe suffragette movement.  The mission, hopes, tribulations and ultimate success of a powerful crusade are recorded in carefully-chosen  words and photos that capture the era and rekindle the spirit that imbued the suffragettes.

This early mention of the forthcoming commemoration is simply a starting point – with special reference to the struggle for equality as it played out in Minnesota.   Future posts will focus on the immense archival records, literature, photos, memorabilia and other resources that make the movement for women’s right to vote  come alive. My hope is that the efforts of those who fought for women’s rights will inspire us to get up and do what needs to be done to assure that the vision and labors of the suffragettes inform and inspire us to value and protect an engaged and informed electorate that makes democracy work.

The principle of self-government cannot be violated with impunity. The individual’s right to it is sacred – regardless of class, caste, race, color, sex or any other accident or incident of birth ~~ Susan B. Anthony

Sorry this is a day late; but it is important so I’m sending it along anyway. 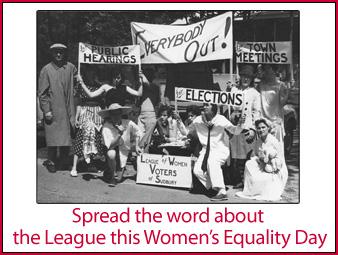 The League of Women Voters of the United States sends this greeting to all!

The day commemorates the 90th anniversary of passage of the Nineteenth Amendment which granted women the right to vote and more.

Women’s Equality Day goes back to 1971 when Congress, with persistent pressure from Congresswoman Bela Abzug and a host of women’s groups, passed a joint resolution designating August 26 as Women’s Equality Day.  The resolution builds on passage builds on the success of the suffrage movement affirming in strong terms that the work to assure full equality continues:  The first whereas of the resolution reads:  “WHEREAS, the women of the United States have been treated as second-class citizens and have not been entitled the full rights and privileges, public or private, legal or institution, which are available to male citizens of the United States.”  In the words of Elizabeth MacNamara, president of LWVUS, Women’s Equality Day offers “the opportunity to continue to make a profound, direct and positive impact on the issues that matter most to our community and the generations to come.