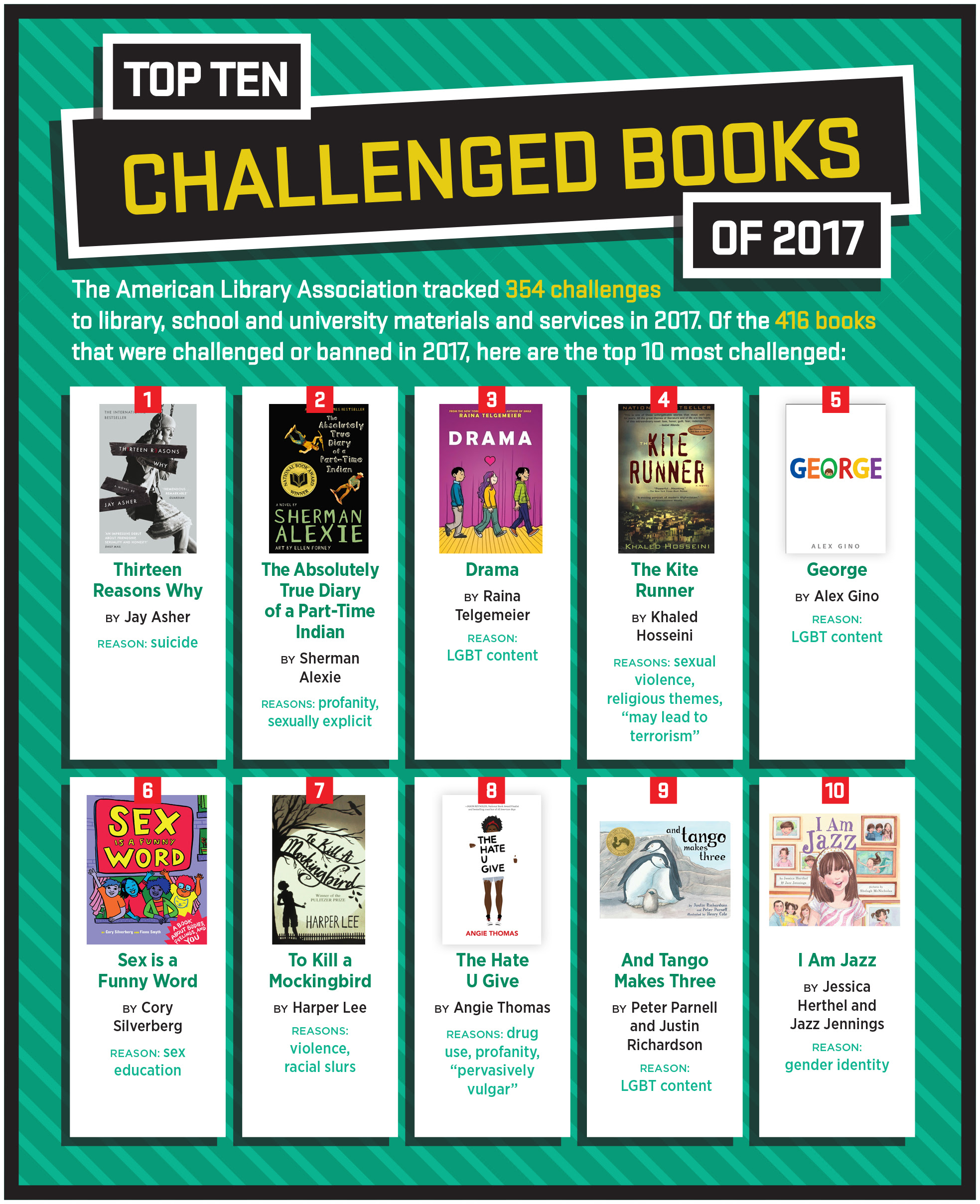 The American Library Associationreleased its annual Top Ten List of Frequently Challenged Books, included in the ALA’s State of America’s Libraries Report 2018, which “affirms the invaluable role libraries and library workers play within their communities by leading efforts to transform lives through education and lifelong learning.”

According to the report, libraries continue to face challenges–including the potential for censorship–to a variety of books, programs and materials. The ALA Office for Intellectual Freedom tracked 354 challenges to library, school and university materials and services in 2017. Some individual challenges resulted in requests to restrict or remove multiple titles or collections. OIF estimates that 82%-97% of challenges remain unreported. Overall in 2017, 416 books were targeted–direct attacks on the freedom to read. The most frequently challenged titles last year were:

Posted in Books and Reading, Libraries and Librarians

Given the free flow of and ready access to misinformation and disinformation it would seem that there should be a special category for “lies in print.”  And yet, the defenders of free speech who sponsor Banned Books Week,  (September 24-30, 2017)  would shun the concept – with great justification.  They are more concerned to respect the right to read and their focus is on the reader who decides the quality of a book, aware that some books don’t deserve to be read.

Another essential starting point is the American Library Association, an indispensable source for background information, including legislation related to access. The ALA  tabulates and posts each year the “top ten” challenged titles: http://www.ala.org/advocacy/bbooks/frequentlychallengedbooks/top10

The Library of Congress has mounted a wonderful exhibit entitled “Books that Shaped America”,  described as books that “have had a profound effect on American life.” They also created a companion list of books from that exhibit have been banned or challenged….

Restriction of free thought and free speech is the most dangerous of all subversions. It is the one un-American act that could most easily defeat us ~   William O. Douglas

Bookstores, libraries and other organizations across the country are preparing for Banned Books Week 2017, which runs next week, September 24-30. Shelf Awareness takes a look at what some stores are planning:

In celebration of Banned Books Week, Ingram is running a special promotion for independent bookstores. Through October 5, indies can receive additional discounts on orders of 25 or more books from a list of over 450 banned and challenged titles. Ingram has also teamed up with American Booksellers for Free Expression to create promotional kits for ABA members. So far, this year’s kit has been sent to more than 500 stores.

Digital audiobook platform Libro.fm, meanwhile, has created a Banned Books Week playlist featuring many of the most-challenged books in the United States, so “readers can choose to listen freely.” Included on the playlist are the audiobook versions of Toni Morrison’s Beloved, Khaled Hosseini’s The Kite Runner, Ray Bradbury’s Fahrenheit 451 and many, many more.

Politics & Prose in Washington, D.C., got a head start on Banned Books Week earlier this month with a store display featuring banned and challenged books from years past, and is once again supporting a D.C.-wide scavenger hunt organized by the D.C. Public Library called #UncensoredDC. For the scavenger hunt, copies of banned books have been hidden around the capital in libraries, museums, cafes and bookstores and will be there until the end of the month. The books feature a special black cover and are “free to those who find them.” Next Monday, September 25, P&P is co-sponsoring an offsite event with Salman Rushdie, who lived under police protection for close to a decade after Ruhollah Khomeini issued a fatwa for his death in response to Rushdie’s novel The Satanic Verses. Rushdie will discuss his new novel, The Golden House, in downtown D.C.

In Omaha, Neb., indie bookstores Solid Jackson Books and Dundee Book Company are hosting a Banned Books Week party at Brothers Lounge on Thursday, September 28. Readers are invited to “come grab a pint or two, join the conversation about why it’s important to keep free speech free, and stick it to the book-burners by perusing important books that some want to label as obscene. And some that are obscene!” A selection of banned books will be available for purchase.

City Books in Pittsburgh, Pa., is hosting a day-long Read-Out this Sunday, September 24. “In direct response to the recent events in Charlottesville and across the nation,” the store has decided to “shine a spotlight on books that feature equity, diversity, and inclusion as a primary function of character and plot” by choosing Anne Frank’s Diary of a Young Girl and Mildred Taylor’s Roll of Thunder, Hear My Cry as the Read-Out selections. The event will run from 11 a.m. until 5 p.m, and readers can sign up for 20-minute reading slots. Food and beverages will be provided by City Books.

In New York City, the Strand Book Store is hosting a Banned Books Week discussion panel on Monday, September 25, in partnership with PEN America. Authors David Levithan (Boy Meets Boy), Coe Booth (Kinda Like Brothers) and Ariel Schrag (Adam) will discuss their experiences of having their books banned or challenged, and how to get skeptical readers to give their books a chance. Jason Low, publisher and co-owner of multicultural children’s book publisher Lee & Low Books, will moderate the discussion.

The Clinton Book Shop in Clinton, N.J., is taking part in the official Banned Books Virtual Read-Out, now in its seventh year. On Sunday, September 24, the bookstore will dedicate space for customers to record brief videos of themselves reading aloud from banned or challenged books or discussing a favorite banned book and what it means to them. The Book Shop will then upload the videos to the store’s Facebook page and submit them to be shared on a dedicated YouTube channel. Anyone who participates in the Virtual Read-Out will receive a 25% off coupon for any book on the banned books list.

And last but not least, Skylight Books in Los Angeles, Calif., is partnering with a local high school for Banned Books Week. Skylight will put up a behind-the-counter display of banned and challenged books with each title featuring a small sign explaining why it was banned or challenged. Customers can then purchase those books at a 20% discount to be donated to the high school’s library. —Alex Mutter

We’re halfway through the week, but it’s not too late to “celebrate” Banned Books Week (September 22-28).  Though the First Amendment deserves constant vigilance, it is wise – particularly in these times – to acknowledge and reflect that censorship is alive, well, and a bit quirky.   Banned Books Week is one of the ways we pause to refresh our commitment to free speech in whatever form and environment.  More important, it is a time to actively celebrate the freedom to read and learn, express and allow others to do the same.

Banned Book Week has its roots in the early 80’s when a surge of challenges to books in schools, bookstores and libraries burst forth.  Today the week is sponsored by a coalition of booksellers, librarians, publishers, journalists, teachers ad readers committed to the freedom to “seek and to express ideas, even those some consider unorthodox or unpopular.”

The list of books challenged in 2012 gives a flavor of what’s being banned these days.  Here are the top five titles that some folks find offensive.

You get the idea.  There are always new titles, while some chestnuts, such as the work of Toni Morrison, are perennial favorites of the banners.

The American Library Association Office of Intellectual Freedom offers some clarification on that question.  The top three reasons given for challenging materials are 1.the material was considered to be “sexually explicit” 2.the material contained “offensive language” 3.the materials was “unsuited to any age group”

There are Twitter parties, one scheduled for Wednesday September 25, 1:00-3:00 CDT – Hashtag  #bannedbooksweek.

Local independent bookstores, educational institutions, libraries and others are sponsoring events, exhibits and promotions to remind the public of the subtle, sometimes not-so-subtle, challenges to the fundamental right to read, learn and express ideas.

Posted in Books and Reading, Freedom of Information, Libraries, Libraries and Librarians

The Banned Books of Our Times

Apologies that this did not get out before the event. [Publisher’s note]

Banned in 2009 or 2010?  You’re in good company – with the likes of Maya Angelou, Marc Brown, Barbara Ehrenreich and Ernest Hemingway – and then again there’s Adolf Hitler.  They are a few score others are on this year’s list of Books Challenged or Banned in 2009-2010, compiled by Robert P. Doyle for the American Library Association.  It’s the lynchpin of Banned Books Week sponsored by ALA in collaboration with a half dozen organizations representing booksellers, publishers, authors and readers.  The aborted burning of the Qur-an has put a unique spin on this year’s recognition.

We enjoy the freedom to read.

We enjoy the freedom of expression.

We enjoy the freedom of the press.

We enjoy freedom of speech.

We enjoy freedom to study, research and publish.

We enjoy the freedom to assemble and influence each other.

We enjoy the freedom to choose our leaders.

We have the right be schools, be well, be without fear, and more.